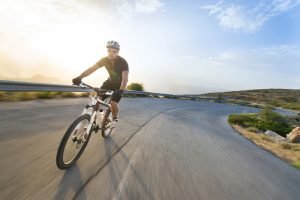 Bike helmets are certainly not a new phenomenon but a new research study supports that wearing a bike helmet could lower a cyclist’s risk of death and severe brain injuries. Unfortunately, cyclists may be at risk for severe injuries when they are involved in a car or bike accident in California.

Being thrown off the bike and into oncoming traffic is dangerous enough but not having a helmet or other safety gear can expose the victim to more severe injuries and potentially even fatal injuries. A new research study identifies that wearing a helmet could be critical for preventing traumatic brain injuries. Millions of Americans ride bicycles every single year but less than half of them wear bicycle helmets, according to research conducted by the Centers for Disease Control and Prevention.

In 2013 alone, there were approximately 900 deaths and as many as 494, 000 visits to the emergency room associated with bicycle related injuries. In order to determine the benefit of wearing a helmet, the research study managers looked at records of more than 6,000 individuals treated in 2012 for skull bleeding after a bicycle accident. Approximately 25% of those patients were wearing a bicycle helmet at the time of the accident. Around 3% of them died and just over half suffered severe traumatic brain injuries.

For individuals wearing helmets, their risk of a severe traumatic brain injury was much lower compared with riders not wearing a helmet. If you or someone you know has recently been injured in a severe accident involving a negligent vehicle driver, you may be entitled to receive compensation for your injuries.