Seatbelts have been in use for many decades at this point, but police officers have continued to report that people don’t use them 100% of the time. Multiple seatbelt studies have shown that the use of shoulder and lap belts has been proven to lower the risk of fatal injuries in motor vehicles. A seatbelt really could save your life in the event of a serious accident. 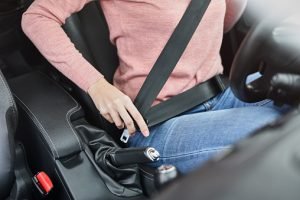 This means that practically all states across the country have enacted some form of seatbelt law, although the strength and the enforcement of that law will vary from one place to another. Seatbelt laws are categorized into two different groups; primary and secondary.

Law enforcement officials in a primary seatbelt state can ticket a driver or passenger for not wearing a seatbelt even if no other traffic offense was committed. On the other hand, secondary seatbelt laws require that law enforcement officers can only issue a ticket for not wearing a seatbelt when another traffic offense has been sighted. The use of seatbelts has been shown to be one of the most effective methods for reducing deaths and injuries as a result of crashes. This has significant public health implications in the United States.

Research has shown that seatbelt laws appear to be some of the most enforced types of legislation with regard to road traffic injury laws. Some studies have found that when looking specifically at the behavior of younger drivers, teenage drivers were 12% less likely to wear seatbelts when they lived in a secondary seatbelt enforcement law.

If you were wearing your seatbelt in a crash, you could still become significantly injured as a result of being hurt in a crash. Schedule a consultation with a trusted San Francisco car accident attorney to learn more.