Anyone who’s been on the side of a busy San Francisco road in a vehicle accident knows just how frustrating it can be to gather information from the scene. You’re often disoriented and attempting to figure out the severity of your own property damage and physical injuries, and perhaps the last thing on your mind is gathering the details that could be used to prepare your personal injury case. New research indicates that drones might be the next wave of technology to assist with evaluations of car accidents. 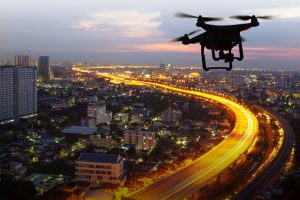 They have become more prominent in other states, including Maine and Illinois. According to the deputy agents and police officers working with these drone, the information gathered by the devices flying above the crash scene is a hundred times more detailed than what could be captured with a person taking a measurement. For years, police investigators at accident scenes used tape measures, roller wheels and chalk marks to calculate skid marks and measurements to figure out what happened. Others have used laser scanning tools to map out the scene. However, those measurements took hours and a substantial amount of police resources.

During that time, the road might have to be closed entirely or certain lanes could be shut down, meaning that crash investigators and emergency responders were in the midst of possibly being struck by traffic moving by. Unmanned aerial vehicles, known as drones, are now becoming popular with police agencies because remote pilots establish the drones and then take high resolution photos that are fed through software after going through a computer. This generates 3D models that can put everything together for investigators, all of which could become extremely important in establishing the grounds for a personal injury case.

If you have already been hurt in a serious San Francisco vehicle accident, you need to schedule a consultation with an experienced personal injury lawyer who understands the importance of proper investigations and the gathering of evidence which must occur immediately after the accident has happened. The sooner that you retain an attorney who has worked in this field with many different crash victims before, the easier it will be to pull together this evidence.