People who are tired behind the wheel can put everyone, including themselves, at risk for accidents. You might be a drowsy driver and not even know it, according to recent research. 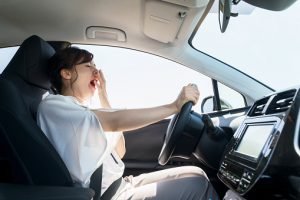 Those people who suffer from chronic sleep apnea are more likely to be involved in vehicle accidents. Anyone who has been diagnosed with severe sleep apnea saw an increase of 123%, while those who had mild or moderate sleep apnea saw the risks go up by as much as 13%.

Anyone who doesn’t suffer from sleep apnea could still be at risk for drowsy driving accidents. Someone who doesn’t have this diagnosis but only gets six hours of sleep a night experiences a 33% higher risk of accidents than if they slept for eight hours every night. Not getting enough sleep has multiple negative repercussions, including increasing your reaction time and your thinking time and can increase the risk for vehicle accidents. This can even lead to being impaired behind the wheel. This higher crash risk was seen in a recent study primarily among people who did not perceive themselves to be sleepy.

Since approximately one-third of U.S. men and one-sixth of American women suffer from sleep apnea, you might not even realize that your drowsy driving could cause problems in a serious accident. If you’ve already been hurt in an accident because another driver fell asleep behind the wheel, contact a San Francisco lawyer today.