A new Esurance study has found that most people agree that distracted driving is wrong and dangerous but plenty of people still do it. Car technology, it turns out, can be a hindrance as well as a help. 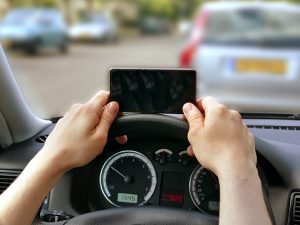 Although most people agree that distracted driving is bad, many people are also willing to admit that they have engaged in it. Approximately 10% of all road deaths throughout the United States today are due to distracted driving. It peaked at 15% a decade ago but the 10% number has held steady for some time now.

Texting and driving unfortunately, has become increasingly common despite safety awareness campaigns and legislation designed to stop it. Texting while driving bans are still common but people still do this behavior. Although smartphones can use ‘do not disturb’ modes, many people are still suffering from advance driver aids and technology inside the vehicle. The Esurance report looked at survey responses for more than 1,000 people. Although more than 90% of the respondents said that texting, email and browsing for apps were very distracting, more than half of those daily commuters admitted to doing it.

The study also found that the longer a person commuted to get to their job, the higher their chances were of getting distracted, most likely by their phone. Even participants who self-reported that they were not that distracted, still admitted to behavior like viewing GPS navigation data or talking on the phone. If you have already been involved in an accident because of distracted driving, you need to report your concerns to a San Francisco car accident lawyer.