Being in an accident is difficult in and on its own. However, this situation can become much more complex when the other driver is aggravated at the scene. You might believe it’s their fault and that there’s no reason for them to get upset, but how should you handle this situation to decrease the possibility of further aggression? Getting angry on your own only serves to make the other driver more frustrated. 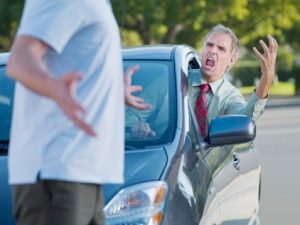 Stay calm and collected even if the other person is not acting this way. You need to remain as calm as possible to have the best chance of collecting their information, such as their contact details and insurance company name and number. At the scene of the accident, the other driver might push you to accept blame. But it is primarily your responsibility to remain cool and collected and make sure that no one needs medical attention.

Avoid any questions or statements about accepting blame for the accident, and instead wait for the authorities to arrive so that you can create a police report. It can be difficult to deal with another person who is angry at the scene of the accident, but your own safety and comfort in this situation should be made as a top priority. If the other driver is too angry for you to be able to communicate with them, ask the authorities to take over this responsibility instead so that that pressure comes off of you immediately.

You have enough to think about in the wake of a serious San Francisco vehicle accident and the last thing you need is an angry driver screaming at you. If you have already been hurt because of another person’s negligent or reckless actions, set aside time to speak with a San Francisco personal injury lawyer today.