Although most people expect that a cell phone is tied to the most dangerous distracted behavior that can happen behind the wheel, a new distraction is even more dangerous, according to research completed by University of Utah researchers. 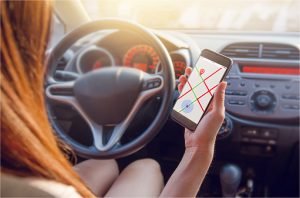 In fact, they found that the most distracting task that can occur inside the vehicle are in this order:

People show that while they text when they drive, settling navigation is actually more dangerous when the vehicle is in motion. This can lead to significant consequences such as a severe accident.

In order to complete the study, it was identified that drivers who used touchscreen and voice activated technology to complete tasks needed more than 24 seconds to accomplish these tasks. Previous research found that the risk of a vehicle accident doubled when a driver took his or her eyes off the road for a minimum of 2 seconds. Programming navigation, however, was tied with a distraction of at least 40 seconds to complete. While there are federal laws to prohibit train engineers from using cell phones, there’s no federal ban on its effect on car drivers.

This means that it’s up to drivers to regulate their own behavior and many drivers tend to be overconfident in their ability to remain distracted. If you’ve recently been involved in an accident with someone engaged in distracted behavior, you may have grounds to pursue a personal injury claim by consulting with a knowledgeable San Francisco automobile accident lawyer.