Research from the National Highway Safety Administration outlines some of the primary causes and factors associated with the majority of pedestrian accidents. Pedestrian accidents include any situation in which a person is running, hiking, jogging, walking, or lying down when he or she is involved in a motor vehicle crash. 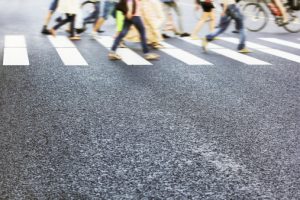 Depending on the speed the vehicle was going, pedestrian accident injuries can range from minor to severe. Those who have been seriously injured experience problems like broken bones, fractures, internal bleeding, and head trauma.

The average age of pedestrians killed in traffic accidents was 46. The average age for other individuals injured in other kinds of traffic crashes was 36. More than two thirds of pedestrian accident victims were male and alcohol involvement for the pedestrian or the driver in a traffic crash resulting in a fatality reported in at 49% of the cases. Pedestrian accidents can lead to severe injuries that make it difficult for the injured individual to move on with his or her life.

In the event that you are involved in a pedestrian accident either as a driver, eyewitness, or pedestrian, there are a few important steps you should take, including:

Following these steps can help stop a bad situation from getting worse. Once police arrive, they can take over management of the accident scene. If you have been involved in a pedestrian accident in California, contact a California personal injury attorney as soon as possible.