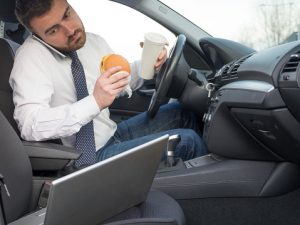 This has coincided with the surge in the use and popularity of smartphones which shows that distracted driving is a key issue for personal injury and workers’ compensation accident claims. The study explored data from 2011 through 2016 and found that the increase in motor vehicle accidents was a phenomenon not limited to workers’ compensation alone.

The cellphone policy kit created by the National Safety Council shows that at least 27% of vehicle crashes involve drivers who are talking or texting on their phones. This is also largely underreported since many people underestimate the amount of time they spend driving distracted or the true level of distraction that coincides with being involved with operating a car at the same time.

Whether it’s on the job or running errands on your own, it can change your life and make work impossible again if you’re hurt in a vehicle accident. Protecting your right to file a legal claim is the only way to be able to move forward again.

If you or someone you know has already been hurt in a distracted driving accident in San Francisco, it pays to find an attorney you can trust immediately.