Do you love driving your SUV? If so, you’re not alone- plenty of Americans love the idea of buying an SUV and using it to get to work and for recreation. But that trend has not been good for pedestrians. It turns out that there’s one type of car involved in more pedestrian fatalities than others, and the growth in the SUV market only spells more trouble for people on foot. 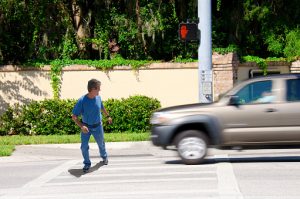 According to new research, increased SUV sales are directly responsible for the surge in pedestrian fatalities; meaning that American’s love of SUVs is killing people in the streets. A recent investigation completed by USA Today and the Detroit Free Press found that an increase in SUV sales over the past couple of years coincides directly with the sharp increase in pedestrian deaths in the United States.

Those pedestrian deaths are up by 46% since 2009 with approximately 6,000 people killed in 2016 alone. In April, Ford announced plans to seize sales of nearly all of their passenger cars. Since SUVs currently account for 60% of new vehicle sales, this doesn’t come as a surprise.

The investigation, however, found that the surge in pedestrian deaths and SUV sales comes down to vehicle size, but is also connected to a lack of action on the part of the National Highway Traffic Safety Administration, despite the fact that this government agency realizes the connection between the number of pedestrians killed and the SUVs. A 2015 NHTSA report, for example, found that pedestrians are two to three times likely to suffer fatal injuries when hit by a pick-up truck or an SUV than when struck by a passenger car.

The New Car Assessment Program is supposed to be revamped in 2018 to include a new score for pedestrian safety, but this has not yet happened. Automatic emergency braking and pedestrian detection have become more popular in recent years in many different vehicle types and researchers at the U.S. Department of Transportation estimate that these features could cut down as many as 5,000 vehicles to pedestrian crashes and up to 810 fatal crashes every single year. However, progress in implementing these tools has varied from one auto maker to another. If you or someone you know has already been hurt in a serious pedestrian accident in San Francisco, you need to schedule a consultation directly with a San Francisco personal injury lawyer.