As California moves into the spring weather, it’s important to recognize the potential danger of landslides and mudslides. These can occur in almost any state, but have caused significant damage across California in recent years. Landslides describe downhill earth movements that can cause damage rapidly or gradually. 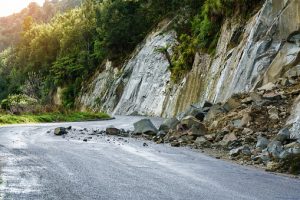 Many landslides are caused by natural events such as the melting of snow or heavy rain. In addition to volcanic eruptions, gravity, and earthquakes, usually landslides are associated with a period of heavy rainfall.

Recognizing the potential danger of a landslide is important for avoiding serious vehicle accidents. If you suspect that danger is imminent, for example, you should evacuate immediately. Listen for any unusual sounds that can indicate that debris is moving. While driving, watch for problems such as falling rocks, mud, collapsed pavement, or other indications that debris has recently flowed.

Any natural disaster also increases the panic of other drivers. Be aware that when trying to evacuate from a danger zone that you might face additional traffic and drivers not fully focused on the road due to their anxiety about leaving quickly.

Defective roadways are another concern following a landslide or mudslide. Repair crews might not be able to get to the scene quickly enough to ensure the road is fully safe, so watch out for extra hazards.

Make sure that you do not attempt to drive during an active landslide as this can greatly increase your chances of being seriously hurt in a crash. If you have already been hurt in an accident in San Francisco as a result of another driver’s negligence or unwillingness to slow down and exercise caution during a natural disaster, schedule a consultation with a San Francisco personal injury lawyer today.