There are many different ways that you could wind up a victim in an accident in San Francisco, but many people don’t think of scooters as being that likely to yield significant medical conditions. However, the number of scooter injuries has been on the rise recently. 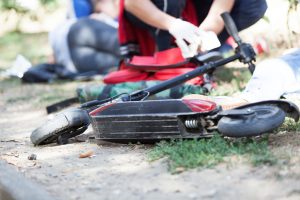 One study found that scooter collisions in the city increased by 58% in the last year, according to a Mission Local analysis. More people were injured on scooter crashes in 2021 in San Francisco than in any year since 2017, which is the first year that scooters began appearing on city streets.

The city has also seen fatalities associated with scooters. In 2021, the number of trips taken on San Francisco rental scooters increased to 1.72 million, representing nearly a 50% increase in usage.

Some of these were associated with severe and mild to moderate injuries as well. Falling off of a scooter or being struck by an object is an extremely devastating experience and one that could yield significant medical expenses. Police discovered that scooter riders in San Francisco were responsible in approximately 55% of crashes, whereas passenger vehicle drivers were responsible in 41% of accidents.

Most of the scooter accidents since 2017 have involved motor vehicles and nearly half of them occurred in SOMA, The Mission, and the Tenderloin throughout San Francisco. If you have been hurt in a San Francisco scooter accident and need help figuring out your next steps, contact an experienced personal injury lawyer in the area.