If you’re hurt in a motor vehicle accident in San Francisco, there’s a chance that this was caused by another person’s reckless behavior. There are many different kinds of injuries you might have to cope with after the crash and one of these is whiplash. 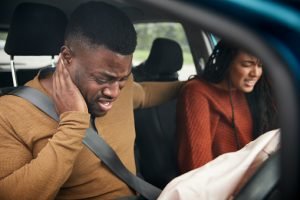 Understanding how whiplash works makes you more likely to get the medical help you need in the time after the accident and to move forward with a legal claim.

Some people are more likely than others to get whiplash, although anyone in a serious enough accident might have to deal with this situation. Risk factors include being female, being struck from behind, a history of neck pain, being a victim in an accident caused by someone else, having tight muscles before the accident, and being struck when your car is stopped.

Most neck pain following a crash stop a few days after the crash or a few months later. However, this is not the case for everyone who ends up suffering in a crash in San Francisco. Whiplash can lead to persistent pain that you struggle with for a long period of time and it can affect your personal life and your ability to work.

Studies have shown, in fact, that up to 50 percent of people are still dealing with car accident neck pain one year later. This is more likely to be the case if the pain shoots into the fingers or arms, if you also suffered memory loss or other neurological issues, if the pain develops right after the accident, or if you’re dealing with severe pain from the time of the accident.

Getting treated for whiplash is important, but many patients continue to have pain and problems even after medications and physical therapy. The worst case of whiplash will leave the victim with some form of pain for the foreseeable future.

If you feel that your life has been upended by a crash in which you developed whiplash, you need to speak with an experienced San Francisco accident attorney.